Following on from the success of the Welsh-themed mural project at the college’s Nantgarw campus earlier in the year, the college invited Siôn Tomos Owen – artist and TV presenter from Treorchy, back to the college to work with another group of learners, this time on the Rhondda campus.

The project, sponsored by the Coleg Cymraeg Cenedlaethol is part of a wider aim to promote the Welsh language across FE colleges, encouraging learners to develop their Welsh language skills. 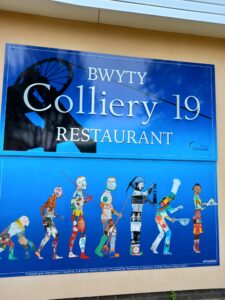 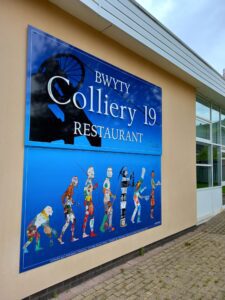 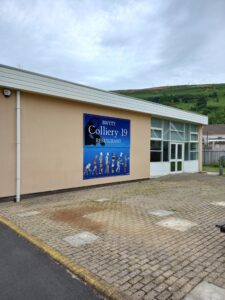 The learners studying on the Pathways 3 course at the campus worked with Siôn through a six week series of bilingual workshops, to develop a mural for the external façade of its Colliery 19 restaurant.

During the workshops the budding artists shared their ideas to create a mural that reflected the heritage of the area and was in-keeping with the Colliery 19 theme, as requested by the Hospitality & Catering department. Once complete the finished mural would take pride of place on the exterior wall of the restaurant to be enjoyed by staff, learners, visitors and the community.

Inspired by Siôn, the learners were keen to discuss their thoughts on what Wales and the Welsh language meant to them and how they would portray that in their mural. Their ideas soon materialised into a colourful, thought provoking images. These images were then used by Siôn to create a bold digital piece depicting ‘Man through the ages’ – with an emphasis on moving away from the traditional employment associated with the area towards a bright future in vocational pathways such as catering and hospitality.

Lois Roberts, Welsh Language Manager at Coleg y Cymoedd remarked: The finished mural on the restaurant building looks amazing. The Pathways 3 learners have worked so hard to produce works of art that really captures the Welshness of the local area and how that relates to their own lives. Thank you so much to Siôn for creating such an iconic piece of art and thank you to the Coleg Cymraeg Cenedlaethol for funding the project.

Speaking about the project, Siôn said: “I was delighted to return to Coleg y Cymoedd to work with the group on the Rhondda campus. I enjoy working with learners on developing murals and the Rhondda learners have been keen to learn new skills to portray their ideas. I’s been an interesting project and I’m delighted with their finished work. I hope the learners are proud of what they have achieved”.