Every year on St David’s Day, Coleg y Cymoedd organises a week of events for learners and staff to celebrate our proud heritage and the Welsh language. And this year, we were not disappointed. Many exciting activities were held throughout the week.

This year, there was a unique opportunity to work with the National Eisteddfod to host a series of on-campus gigs and workshops to promote the Eisteddfod which will be coming to Rhondda Cynon Taf in 2024. At the Nantgarw and Aberdare Campuses Chroma performed and at the Ystrad Mynach Campus we welcomed Mali Hâf. 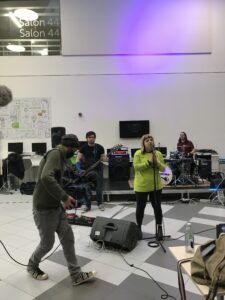 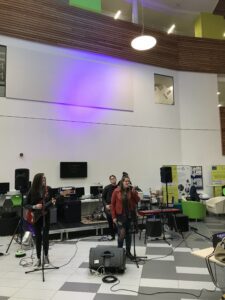 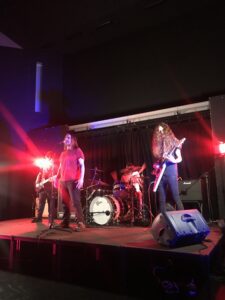 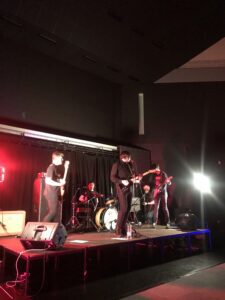 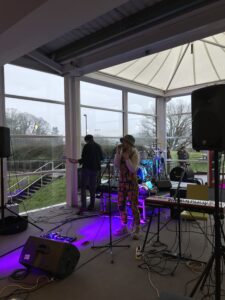 The crowds were also entertained by Coleg y Cymoedd’s own bands, The Hostels; The Redfreds and Wallflower. As part of this collaboration, a group of Music Production students at the Rhondda and Nantgarw Campuses had the opportunity to attend a bilingual workshop with Heledd Watkins, of the band HMS Morris, on how to introduce the Welsh language to their music.

Josie Davies, one of the learners who took part in the workshop, said: “I enjoyed being better educated about Welsh music and Welsh culture. I felt very engaged with the session and enjoyed taking part. I’ll be listening to more Welsh music and composing more Welsh songs.”

A variety of activities were held by different subject areas throughout the week, including a Basic Welsh session with the Pathways 4 – Gateway to Employment group at the Nantgarw Campus. Welsh Language Manager Lois Roberts ran the session with the group, and they learned greetings, numbers and vocabulary relating to St David’s Day.

The celebrations continued with an online quiz, where learners and staff had the opportunity to answer questions relating to Wales and win vouchers. The response was incredible, with 284 learners and staff competing. The winners were Natasha Stone, Cerys Baker, and Luke Murgatroyd.

Rounding off the celebrations was the annual St David’s Day competition with great excitement across the college – who would be the winners?

The competition, sponsored by the Coleg Cymraeg Cenedlaethol, was open to individuals and groups across the four campuses. The competition asked learners to answer the question ‘What does Wales mean to me’, by any means they wished.

There have been some truly amazing entries and the judging panel had the difficult task of selecting the winners.

The Rhondda Campus winning entry, and the overall winning entry was submitted by Ben Jonson and Liam Strudwick (Carpentry Learners) and Ethan Black and Sam Barry (Level 3 Engineering) for their coal dram.

The winning entry from Nantgarw Campus was a poem by Level 3 Childcare learner Mollie Evans.

A giant dragon head of papier-mâché and needlepoint created by Vocational Access learner, Gemma Bush was the winner at the Ystrad Mynach Campus.

Congratulating the participants, Lois Roberts, Welsh Language Manager said “It’s been an amazing week. This year we have really seen learners and staff embrace the event and get involved with a whole host of activities across the college. And the standard of the St David’s Day competition and the effort put into it was truly astounding. I’m over the moon!”